The semester is over. Revisions are done. And I’m officially on summer vacation.

It might take me a little bit to unwind because, let’s face it. There’s so much truth to this picture: 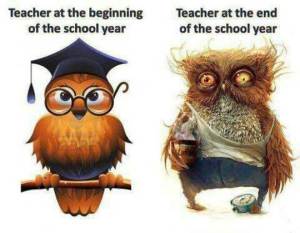 The end of the semester came with its usual flare-up–though it was a bit harsher than the last one–so I’ve been focusing on healing, resting, and getting better. It was bitter, coming on the heels of a great month and a half (Jan-Feb) where I thought for sure I was in remission. I suppose it’s always harder that way, isn’t it? When you’ve had a taste of “normal” only to then be whacked by the pain and exhaustion. But onward. The rest is helping and I’m feeling better, limping less, sleeping more. And writing more, which absolutely, positively helps me improve. Thank God for this blessing!

I’m looking forward to being back, to resuming my Motivational Monday series and bringing in some new projects here on the blog.

1. I absolutely, positively, no questions asked love the 2004 film The Phantom of the Opera. It is one of the most beautiful adaptations with exquisite detail to set and costume. And of course, there’s the music: it’s hauntingly beautiful. It’s the kind of music that reaches deep into your core and moves you. Andrew Lloyd Weber is a genius. I have to admit that I saw the movie before I ever saw the Broadway production, and that the production I saw was a traveling one, when they came many years ago to South Florida. Though I liked that version, it simply didn’t live up to the art that was the movie (and I love live theater!)

It had been a couple of years since I’d last seen it, and a few weekends ago, my husband and I had a date night in. We pulled out the movie and watched it, marveling again at each part, each song. And I keep replaying the songs –I can’t get enough of them.

of me itched to go see it. That’s me now. Waiting. (Im)patiently. Tapping my toes, strumming my fingers, flipping through the pages, again. Just waiting. I don’t know when I’ll be able to go, which makes the waiting that much more unbearable.

4. I’m eagerly awaiting Veronica Roth’s book Insurgent to come out. I think it’s May; I pre-ordered it on my phone. Sometime before it comes out, I’ll have to re-read Divergent so that it’s fresh in my mind. It’s one of several books that I want to read this summer.

5. I want summer to get here. Now. I’m not a very patient person (though I can be). Four more weeks until this term is over and grades are due. After that, though I’m teaching online courses in the summer, the hours during the day are mine for a glorious month while my son is in school. That means I will have four days, for five weeks, to just write. Of course, I have to factor in some gym time, my gallbladder surgery, and some grading, but I will have more uninterrupted writing time than I do during the regular terms. And I just can’t wait! My goal of finishing the first draft by the end of summer is very much within my grasp…I can almost feel it. And I’m anxious to finish it now. So I can begin really revising it and whipping it into shape; though I tend to write and revise as I go along (I can’t just write from start to finish–I do a lot of back and forth), I won’t feel as if I’m truly revising until the whole damn thing is done. I already have agents I want to query and other stories floating up there in my mind, so I just need to finish writing this thing. Now. 😉

This is happening tomorrow, Sept. 23rd @ 7 pm EST!
#Repost @traveliandome with @make_repost
Fall is perhaps my favorite season. My birthday’s in the fall (less than 2 wks 🎉), as is my mom’s, and I know cooler, more comfortable temps are coming. I feel better with less heat and humidity, and fewer storms. So hello, fall, I’m so happy you’re here.
#Repost @soaring20spb with @make_repost
Feeling so grateful and humbled. It’s easy for writing to feel solitary, for you to work on a project with all your heart and soul, not knowing how it’ll be received when it flies into the world. But you’ve all welcomed these stories in a way that surpassed all my expectations. Thank you. I hope I can only continue to do these stories justice, to create characters and worlds kids can relate to and take ownership of, to show them their cultures and own stories matter and are worthy of telling. I can only hope to continue being a storyteller for as long as God will grant it.